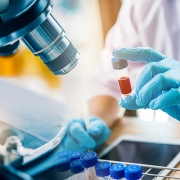 Newly-listed GoodRx Holdings Inc. got caught in the crosshairs of Amazon.com Inc.’s latest plans to shake up the drug industry, triggering a wipeout of about $5 billion in market value in just two days. But its chief executive officer is shrugging it off.

The Santa Monica, California-based company, mostly known for its prescription-drug pricing app, plunged to a record low of $33.51 on Wednesday in the wake of Amazon’s plans to sell medicines to its U.S. Prime members. GoodRx drew its first analyst downgrades after the news, with some saying Amazon’s foray could dampen the company’s growth.

GoodRx shares have rebounded more than 15% in the last two trading sessions, though the stock has still shed more than 30% of its value from an Oct. 6 high. Wall Street analysts are split about its future returns, with seven buy-rated followers compared to six with hold equivalents and one sell. At least one analyst has upgraded the stock.