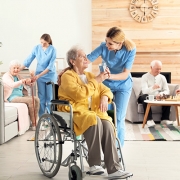 A nursing home accused of illegally “dumping” patients onto city streets and into ill-equipped homes in order to take in more lucrative COVID-19 patients will nearly double its nursing staff, allow increased oversight and pay $275,000 in penalties and costs to settle a lawsuit brought by the Los Angeles city attorney’s office.

City Atty. Mike Feuer on Monday announced the legal agreement with the Lakeview Terrace skilled nursing facility, which he had accused of “sustained” and “intentional” misconduct in failing to adequately tend to some patients, while pushing others out of the 99-bed home.

The city alleged in its lawsuit that the facility west of downtown had an incentive to discharge long-term residents in order to make room for COVID-19 patients, who brought Lakeview Terrace much higher reimbursement payments from Medicare.