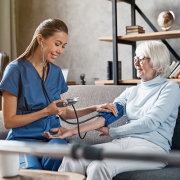 After over six months of separation, Beverly Wenzel is eagerly anticipating a visit with her 90-year-old father whom she hasn’t been able to see in person since early March.

“I am glad the door is opened, and I can physically get it and see him. He’ll recognize my voice,” she said. Her father resides at Crossroads Nursing and Rehabilitation Center in Hearne, which has said it plans to start visits on September 24 by appointment.