Blog - Latest News
You are here: Home1 / Around the Web2 / Mental Health3 / Social workers and EMS to respond to mental health emergencies NYC-wid... 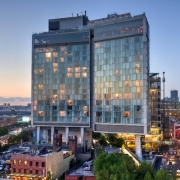 City Hall has decided to expand a pilot program that sends social workers and EMS staff to non-violent mental health emergencies instead of cops citywide to all precincts — even though the test-run hasn’t even started yet, Mayor Bill de Blasio announced Monday.

“Expanding it city wide? We’re not even up and running yet,” Anthony Almojera, an EMS lieutenant in Sunset Park who is vice president of Local 3621 of the FDNY Uniformed EMS Officers, told The Post.

“They were still trying to solicit members about a week, week and a half ago but the training hasn’t started yet… A lot of members didn’t jump at the opportunity to go and face heightened danger for the same pay.”

In late February, when the test run was originally set to kick off, City Hall said the program would be starting in the 25th, 28th and 32nd precincts. Now, two months later, de Blasio said they’re “convinced” the “approach is going to work citywide” even though training hasn’t begun yet, a spokesperson said.