Blog - Latest News
You are here: Home / Around the Web / Hospitals / Whatever Happened To … The Instant Hospitals Built For COVID-19 Patients... 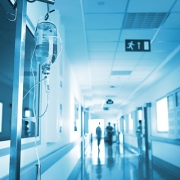 The 1,000-bed Huoshenshan Hospital (meaning Fire God Mountain) opened its doors on Feb. 3. Five days later, its sister hospital, Leishenshan (meaning Thunder God Mountain), opened with another 1,500 beds. Although some reports indicate Leishenshan was slower to fill up than Huoshenshan, according to Chinese state media, it was soon operating at near full capacity as well.

“Most news that came out about [these hospitals] was state-run news by China, so there’s little information on how effective they actually were, because there’s a propensity to publicize only the better side of the news,” says Raymond Pan, the design principal at HMC Architects. In 2011, Pan won an award for his design of Shunde Hospital of Southern Medical University in China, located where the first outbreak of SARS happened in 2003. At the request of Chinese health officials, his design allows the hospital to easily isolate any part of the hospital in the event of an infectious disease outbreak.