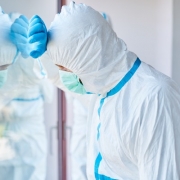 FARGO — As the COVID-19 pandemic drags into the winter months, health care facilities across North Dakota are feeling the effects of staffing constraints and a barren job market for nurses.

Hospital systems statewide including Sanford Health, the Jamestown Regional Medical Center and Minot’s Trinity Health have activated their surge plans, which include measures such as limiting visitations and elective surgeries as well as in some instances sending patients either to local nursing homes or out-of-state locations such as Billings, Mont. and Aberdeen, S.D.

With community spread, close contact and household contact to blame for more than eight of every 10 COVID-19 cases in the state, nurses statewide have either taken ill or needed to be isolated due to a potential virus exposure. The resulting strain on staffing became so dire that North Dakota Gov. Doug Burgum announced Monday, Nov. 9, that asymptomatic COVID-19-positive healthcare workers could continue working in virus units at hospitals and nursing homes. North Dakota — which has led the nation in new cases per 100,000 residents for much of the last two months — is believed to be the only state to implement such a policy, Forum News Service research found.